We are honored to present this month’s episode of Leadership Reimagined with Sarah Megan Thomas, an award-winning actor, producer, and writer having written, starred, and produced three complex female films, featuring women on Wall Street, women in war, and women in sports.

Tune in as Sarah shares the inspiration behind focusing her theater lens on creating iconic female stories and disrupting gender inequality in the entertainment business. Hear why she is committed to telling stories that have shaped our lives and society, and the impact of women.

A Call to Spy (2020) – At the beginning of World War II, Winston Churchill was desperate. He ordered his new spy agency to recruit and train women. Interweaving the adventures of female spy, Virginia Hall (played by Sarah Megan Thomas), and other intrepid women whose talents and sacrifices were crucial to Allied espionage efforts during World War II, ‘A Call to Spy’ revolves around three female spies from different nationalities, from different religions, who united to resist a common evil.”

Equity (2016) – Is a female-driven Wall Street thriller. The Film premiered in Dramatic Competition at the Sundance Film Festival, where it sold to Sony Pictures Classics. The New York Times made “Equity” a Critic’s Pick when it was released theatrically nationwide. The Hollywood Reporter reviewed Sarah’s performance as “subtle, but gutsy.” 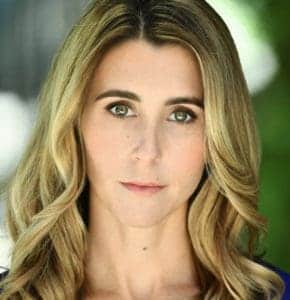 “The power of the individual is such a timely theme right now.
Whatever you believe in, people may tell you no.
You have to keep trying, you have to open other doors.”

Motivated by the notion “Where are the strong women that I know exist and why don’t we see them in film?” Having not seen female-driven opportunities in the movies for women in war, Wall Street, or sports, Sarah decided to create them. It is with great privilege we present to you this episode of Leadership Reimagined, “Women on Wall Street, Women in War” with Sarah Megan Thomas.